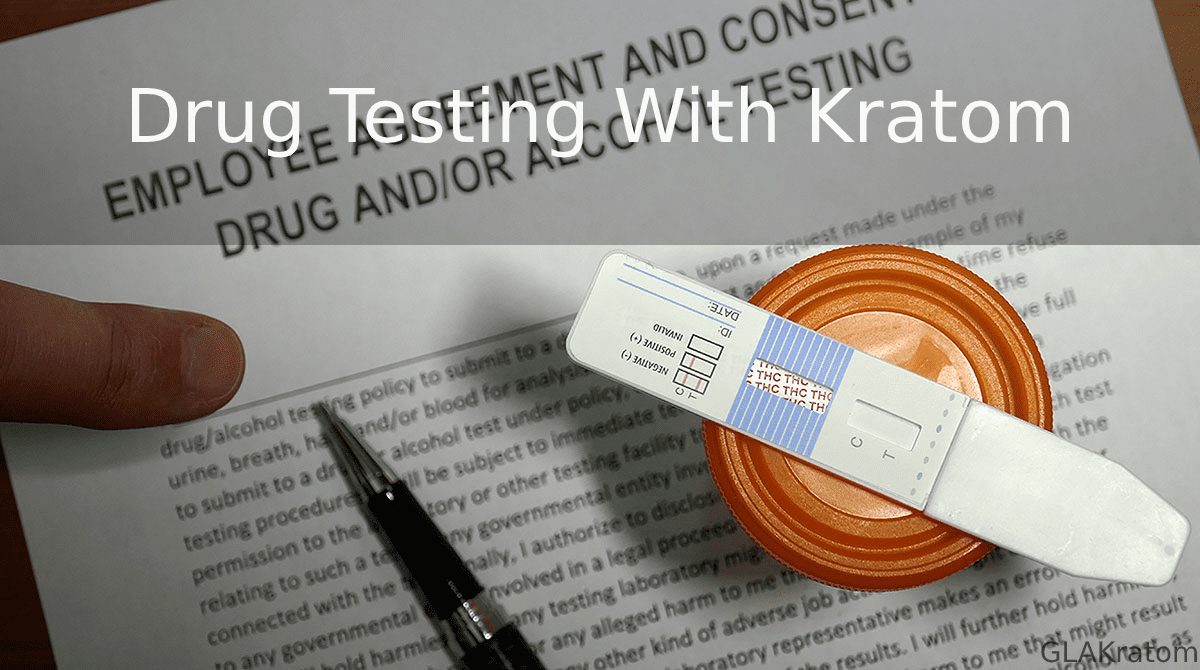 The popularity has sky-rocketed over these last few years when it comes to workplaces enforcing policies that are drug-free. If you’re contemplating adding Kratom into your daily regime, you could have a couple questions about kratom possibly popping up on a drug test by your employer. Whether Kratom shows up on a drug test usually depends on how often you might taken Kratom and what the test is designed to do.

Can Kratom Show Up On Drug Tests?

To sum it all up, Kratom is actually detectable in blood and urine drug tests, as it does constitute a foreign chemical in your bloodstream.

Legality of Kratom in the United States is really a bit complicated and varies heavily from state to state. Since Kratom is relatively obscure, drug tests aren’t normally designed to look for Kratom.

The average workplace drug test looks for cocaine, amphetamines, cannabinoids, PCP, and opiates. Kratom’s not detectable in opioid drug tests, as the two chemical compounds are not really structurally related, contrary to some beliefs.

It’s extremely unlikely that Kratom could cause a false positive in these generalized tests, but there’s been studies that show taking Benadryl or Prozac and Kratom together can trigger a false-positive result. You should always speak with a medical professional before taking over-the-counter or prescription drugs while taking Kratom.

If you take one of these drug tests right after taking Kratom, metabolites may show up in the test as a different substance.

Kratom is not restricted under the United State’s Controlled Substances Act, so it’s not actually subject to federal regulations. The Drug Enforcement Administration (DEA) does list Kratom as a drug of concern.

Because the federal government hasn’t taken a harsh stance on Kratom, legislation regarding this natural plant is left entirely up to the states. Some states have banned Kratom and other states allow counties to outlaw Kratom within their borders.

Kratom isn’t illegal, so why would drug tests be designed to detect Kratom?

It may be within your employer’s rights to order a Kratom drug test if your work productivity is slacking and you are suspected of using Kratom irresponsibly. When you apply for a position, your employer should make the drug policy available to you, so you know what to expect.

The average Department of Defense (DoD) drug tests do not detect Kratom, although Kratom is not approved for service members to use.

Public schools have also started performing random drug tests on students in extracurricular activities and teachers with greater frequency since the U.S. Supreme Court broadened the authority of public schools to test students for illegal drugs in 2002. These tests are generally only designed to detect illegal drugs. However, people younger than 18 should not ingest Kratom without medical advice to do so. Please keep in mind your local laws regarding Kratom and stay safe.

Can My Employer Randomly Drug Test Me For Kratom?

There are no federal laws restricting employer use of drug tests, although some state regulations may restrict an employer from taking random drug tests for employees in positions that have extra safety precautions. Your employer will most likely pay for the drug testing, which usually occurs during your normal working hours while you are on the clock.

If your work follows a comprehensive drug-free program, you should have access to a written policy that outlines the expectations regarding employee drug use. If you are concerned that Kratom may endanger your job, speak with your human resources representative to learn how Kratom is addressed in your company’s drug policy.

Kratom is not actually considered a performance-enhancing drug, although many athletes do like to ingest Kratom before or sometimes after working out.

How Long Will Kratom Stay In My System?

It takes around 5-7 days to flush an average dose of Kratom out of your system. Minimal amounts of Kratom might be detectable in a urine sample for a week or slightly longer after ingestion.

A blood test is more often than not, able to recognize Kratom in your blood for up to 24 hours after your dose. If you use Kratom often, it can build up in your system and be detectable in your blood for longer than a day following your last Kratom dosage.

The half-life of Kratom is around 24 hours for the main alkaloid Mitragynine, while some alkaloids half-life is just over 2 hours, after which the concentration of Kratom in your blood is about half of the original dose.

Can I Decrease The Amount Of Time Kratom Is In My System?

The bigger the dose of Kratom, the longer it’s going to stay in your body. Other factors that impact how long kratom may stay in your system include how you ingest the Kratom and your individual body composition.

Consuming Kratom on an empty stomach or drinking lots of water after taking Kratom can decrease the amount of time it stays in your system.

Mitragynine, the active chemical in Kratom, is fat-soluble or stored in your body fat. Kratom can remain longer in people with a higher body fat percentage. Younger people generally have faster metabolisms and in response, rid themselves of Kratom faster than older people.

How Does My Body Metabolize Kratom?

Mitragynine is the strongest and most plentiful alkaloid in Kratom, and is eventually broken down by the liver into other metabolites that are excreted through the urine.

Phase I metabolism involves modifying the compound through oxidation or hydrolysis reduction. The Phase II reactions conjugate the metabolites with charged species.

In a urine drug screen, you simply supply a sample of urine to be analyzed by a doctor or trained technician.

Immunoassay (IA) tests are the most commonly used drug tests because they are fast and cost effective. These tests sometimes provide false positives, meaning they occasionally report substances that are not currently present in the urine.

Gas chromatography-mass spectrometry (GC-MS) is the more reliable urine testing system. This test is often reserved to verify the results of people who have failed a previous drug test.

Both types of urine tests can produce false negatives, where substances in the urine are not detected, especially if the urine is very diluted. The tests also both operate with cut-off levels. The cut-off level for a Kratom drug test is often 1 ng/mL; the concentration of Kratom in your blood must be at least 1 ng/mL to produce a positive result.

The cut-off method is used to avoid detecting passive drug consumption. This helps prevent a drug test from producing positive results because the subject had just eaten poppy seeds or inhaled second-hand smoke.

After the drug tests, you should be notified of the results within a few days. Negative results often take longer to be analyzed, as they are double-checked for accuracy.

What Happens During A Drug Test

The drug test administrator explains what you are expected to do during the urine sample. You should follow their instructions carefully and not attempt to tamper with your urine sample. Tampering with a drug sample often results in a need for another test from dilution, or an automatic positive result and additional disciplinary consequences.

Over-the-counter medications, herbal supplements, and prescription medications can sometimes show up on a drug test. Tell the test provider if you are taking any medications that could cause a false-positive.

If you are aware of an upcoming drug test, it is best to avoid taking Kratom for the week leading up to the test. Although it’s unlikely that anything unusual will be detected in your system, you can eliminate the risk and avoid a potential hassle by abstaining from Kratom.

Kratom is highly potent and can stay in your system for several days, so you should only consume Kratom sourced from a trusted supplier, like GLAKratom. Our products are third-party laboratory tested so you know exactly what you’re ingesting.

Our mission is to provide our customers with pure, high-quality Kratom so you can feel your best. That’s why we don’t allow any bacteria, chemicals, pesticides, heavy metals, or pathogens to be blended with our pure Kratom powder.

Our Kratom powder is organic and ethically sourced from Indonesia. By partnering with experienced farmers, we can provide Kratom products from the highest quality botanicals that were grown using traditional farming techniques.

Kratom contains alkaloids that are broken into metabolites during the digestive process. These metabolites can be detected in a drug test that is designed to look for Kratom. However, the majority of drug tests are only designed to detect illicit drugs, so a dose of Kratom shouldn’t cause you to fail your drug test.

If you are an athlete, service member, or if you perform jobs that require extra safety measures like operating heavy machinery or on people, speak with your doctor and employer before introducing Kratom into your routine. People who work in drug-free offices or have failed drug tests in the past should also consult their employers before deciding to take Kratom.

When in doubt, consult your employer about Kratom and stay within the dosage guidelines so you can enjoy Kratom in your wellness routine and boost your wellbeing throughout your day.